1980–2003
Yasmine Amanda Bleeth (Born June 14, 1968) is an actress and model who played the role of Caroline Holden on Baywatch from 1993-1997 with a few recurring appearances and Baywatch: Hawaiian Wedding. She also reprised her role as a guest star in the spin-off Baywatch Nights in the episode The Curator.

Yasmine is also known for her roles of Ryan Fenelli in the soap opera Ryan's Hope, Inspector Caitlin Cross in the crime-drama series Nash Bridges and Heather Lane-Williams in the short lived soap opera Titans, and numerous film appearances including BASEketball and Undercover Angel.​

Characters portrayed by Yasmine Bleeth on the show[edit | edit source] 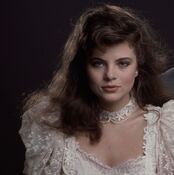 Yasmine as Heather Lane-Williams in Titans

Yasmine in an advertisement

1999 - Motorola - Introducing E-Messaging with Yasmine Bleeth
Add a photo to this gallery
Retrieved from "https://baywatch.fandom.com/wiki/Yasmine_Bleeth?oldid=13069"
Community content is available under CC-BY-SA unless otherwise noted.